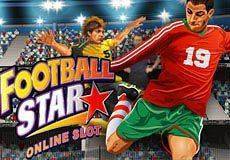 star star star star star 4/5 (798)
Football Star is a themed sport game that was created by Microgaming and it offers players a multitude of game features. The game is a 243 ways o win video slot and offers a free spin round where players can boost the payouts on the game and enjoy some amazing rewards. This is also a rolling reels game.

The second bonus feature is activated randomly and turns either reel 2, 3 or 4 into a Wild reel. The Rolling Reels feature is not available when this happens.

The third bonus feature is activated when you receive 3 or more of the â€˜Footballâ€™ scatter symbol anywhere on the reels. When this happens you will be awarded between 15 and 25 complimentary spins depending on the number of Football symbols you received. During the complimentary spins each time the Rolling Reel feature is activated consecutively the multiplier that is applied to new winning symbols is increased.

Your feedback about Microgaming`s Football Star slot game would help us making Turks&CaicosGames more interesting and useful for our customers, so please rate this game or send us your review. Your opinion is very valuable to us!
Play and win for real with welcome bonus! Deposit